Charles Jagger and the Cambrai Memorial 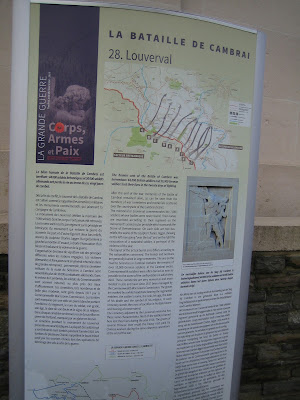 This year's annual trip to the Somme battlefields included a visit to the Cambrai memorial at Louverval. I've written about Charles Jagger previously on this blog and about his work in poems in Voices from Stone and Bronze so I was keen to see the two Portland stone reliefs which he'd created for the memorial.

The memorial itself was designed by the architect Harold Chalton Bradshaw, to remember the 7,048 men who were missing after the Battle of Cambrai. Jagger worked on the two stone reliefs during 1926-1928 and the memorial was unveiled on 4th August 1930 (the same day as the unveiling of the memorials at Loos, Pozieres, and Vis-en-Artois). 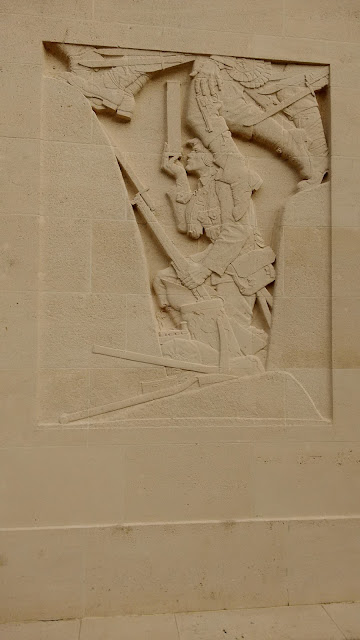 The reliefs are stunning pieces of work, both in the level of detail (the more you look the more there is to see) and in their portrayal of the grim realities of trench warfare. In A Forward Artillery Observer in a Captured Trench, the central figure is the observer looking through a periscope. Above him a gun is falling from the hand of another soldier (has he just been shot?) and at his feet are various items which would have been found in the trench, water carrier, entrenching tool and what may be a pickaxe. The observer himself reminded me of Jagger's Solider on Defence (which is part of the Hoylake and West Kirby memorial) and I wondered if he had used the same man as the model for this? 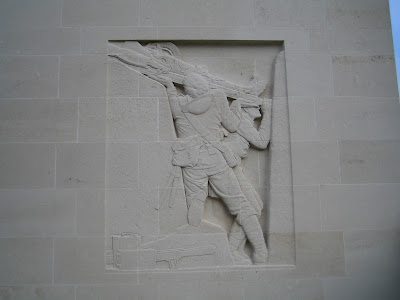 The second panel, Stretcher Bearers, has a similarly claustrophic qualityand if you look closely you can see how tightly the wounded man is gripping the side of the stretcher. As Ann Compton notes in her book, The Scuplture of Charles Sargeant Jagger (p71 2004), it "takes up the theme of his early work in confronting the reality of injury and death among the troops." 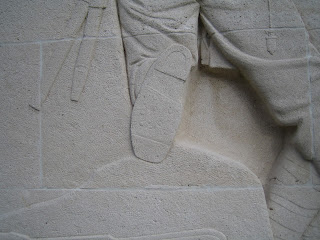 Look at the detail on the sole of the boot and the puttees of the soldier who is reaching up to hold the stretcher.

The stretcher bearers and observer are working in tight confines and looking at Jagger's reliefs felt like being in the trench with them.
Posted by Caroline at 14:22