My mother always used to say that if you came across a Honeybill anywhere in the world the chances were that we were related – Honeybill was her maiden name. It turns out she was more correct than she realised as the surname was ‘created’ by a clerk’s error in the mid eighteenth century which turned Honeyball into Honeybill.

During our visit to the Thiepval memorial I noticed a bank of computers for visitors to use to look for records of the dead. I sat down and typed in HONEYBILL – half expecting nothing to come back. My grandfather who was born in 1903 was mercifully too young to fight. His two older brothers were probably already seamen and therefore unlikely to have been conscripted.

Back came an entry for

Our guide, Jeremy, ever alert to the possibility of providing one of his charges with a more personal story suggested that we could go and look for him the following day at Vis-En-Artois. Percy was in the first battalion, Kings Own (Royal Lancaster Regiment). That evening I had a text conversation with my brother, Phil about our family tree. It being ten o’clock at night back home he was not about to go into the attic to find it but thanks to a couple of internet searches identified Percy as being from the Manchester side of the family – he was resident in Fallowfield at the time of the 1911 census and Phil told me he was remembered at Vis-en-Artois but ‘not in a grave’. 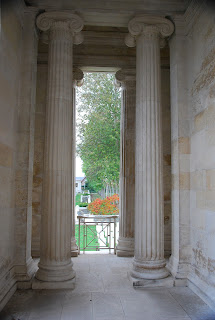 The cemetery at Vis-En-Artois
is on the edge of the town by the main road. Many of the other cemeteries we visited were smaller and surrounded by fields and farmland. In contrast Vis-En-Artois is relatively urban – a more familiar environment for a lad from Manchester.

“Look for Panel 3” Phil had said. Jeremy led the way past all the graves, under the arches of the memorial to the white stone panels at the back. I’d already learned from the earlier memorials that these would be organised by regiment and there on panel 3 were all the names of the dead of the Kings Own Royal Lancasters. When I turned to comment to Jeremy I found he had tactfully and surprisingly swiftly disappeared. The panel had been damaged by the ingress of rain which in places had spoiled the stonework making the names blurry and difficult to read but in the middle his name, Honeybill, P was quite clear – as if he’d been waiting. 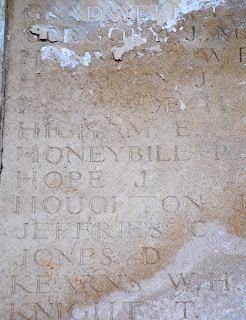 So I’d found Percy and yet he was among the missing. One of the soldiers with no known grave perhaps because there wasn’t enough of him left after death to find and bury or because he is in the grave of an unidentified soldier – known only to God (there are 1,458 of these in this cemetery alone) or because he is one of those whose remains are still out there somewhere on the battlefields. 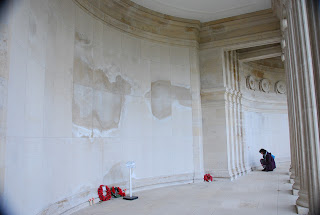 Photographs are by Vanessa Gebbie.
Posted by Caroline M Davies at 21:46