Once I was back home I applied myself to finding out more about Percy Honeybill and what might have happened to him. As always Jeremy Banning was an invaluable source of information. He confirmed that Percy would definitely have been in the first battalion of the Kings Own (Royal Lancaster Regiment) and would have been killed in the attack on the Drocourt-Queant line - a strong defensive line not far from Vis-en-Artois.


This was one of the strongest systems of field fortifications that the British Army will have come up against. Though described as ‘a line’ it was in fact a position of great depth incorporating several mutually supporting lines. It comprised ‘a front system and a support system, each with two lines of trenches provided with concrete shelters and machine-gun posts, and very heavily wired. 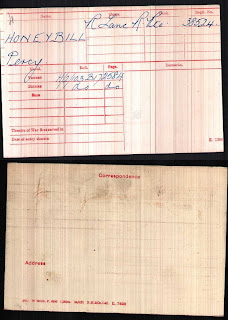 Jeremy produced Percy’s medal card with basic information about him and explained that Percy would have been a reinforcement for men killed or wounded and that he would have joined the battalion after 1 Jan 1916 (as he was not entitled to the 1914-15 Star). You see what I mean about expert guidance I would not have known that. Then in fairly short order a copy of the war diaries of the First Battalion arrived in the post from Jeremy.


The battalion began September by relieving the 1st Battalion Somerset LI in front of Eterpigny, There was an enemy gas attack in the valley and considerable numbers of casualties.

The entry for 2nd September – the day Percy was killed reads


The Battalion attacked at 5-0am on DROUCOURT-QUEANT line E of ETERPIGNY – D.Coy [D company] to occupy furthest line. C Coy. to occupy third line – B Coy to occupy second line and A Coy. to occupy first line. The Coys places bombing blocks on their left flanks and at 8-0am began to bomb northwards with the object of taking ETAING under cover of a barrage. The attack was held up by M.G. fire from PROSPECT FARM. Casualties were 13 killed and 36 wounded.

The barrage as arrange for 8-0am to cover our advance on ETAING, did not materialise and heavy M.G. fire from the left prevented any attempt being made to capture the position. the enemy shelling was not intense and somewhat scattered. Battn,H.Qrs was established about 600 yards E of ETERPIGNY. During the advance the Battalion took 300 prisoners .

As well as Percy thirteen other men (all with the rank of Private) from his Battalion are remembered at Vis-En-Artois as being killed on 2nd September. Their names are