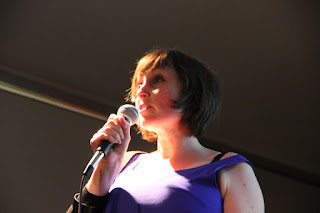 Today I’m delighted to welcome Becky Cherriman to the blog.
She is a writer, creative writing facilitator and performer from Yorkshire. Her pamphlet, Echolocation is being launched this week  and is available from Mother's Milk Books – a poetic journey into single motherhood, infertility, the adoption process and more from a writer who has lived them all.
She has numerous publications including with Bloodaxe, Mslexia, and her poems have appeared on Umbrellas and the walls of a recording studio. 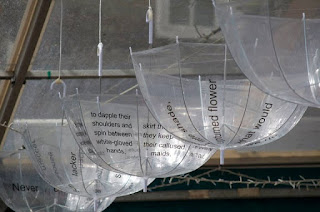 Her poems have won prizes, including first prize in 2012 with Speakeasy and second in the Ilkley Literature Open Mic 2011. Her first full collection, Empires of Clay, is being published by Cinnamon Press later this year. Becky and I worked together during 2014 when I was her mentor. As is often the case when your interest in poetry chimes with someone else I learned from the experience too, especially from the delight Becky takes in responding to art as you will see from the following interview.


Without stopping to think, can you name four poets whose work has influenced you?
Dylan Thomas, Mary Oliver, William Shakespeare, Anne Sexton
What are you passionate about and what inspires you?
I'm passionate about people and relationships between people, between people and their histories, between people and landscapes.  These things inspire my work as do art, politics and real life events, particularly dramatic ones.
Can you describe your writing practice or process? Do you have a tried and tested means of getting started? Has the way you write changed?
When it comes to poetry I usually start off with a very rough draft, which tends to be more notes than a proper draft.  If there is the essence of a poem there, I come back to it, ideally no more than a week later and type up what I have.  I expand this into a first full draft over one to three sittings, which may involve some research depending on what I'm writing about.  Then there are weeks, months or years of tweaking before I ask for feedback and tweak again.
I do more rewriting and editing than I used to but then what I write now has more layers to it and so takes more crafting.
What advice would you offer to another poet who is in the process of putting her first pamphlet or collection together?
It was invaluable to me to have you as a mentor to help me edit the poems but particularly to help me find ways in which the poems could hang together.  Although we didn't do so much of this for the pamphlet, what I learned from you in putting together the collection definitely helped me decide on an order for the pamphlet and which poems not to include.  Of course not everyone can find a mentor but my advice would be to find someone who is happy to read through the poems in your collection, discuss the themes within them and what potential order they could go in.
Writers' groups and spoken word events can be great places to do find someone to pair up with who is at a similar stage to you.
Which poem in Echolocation has the most meaningful backstory to you? Can you share that backstory with us?
I'd probably answer this question differently if you asked me this in a year. Right now it is 'Graves' Disease'.  The poem was the last to be included in the book and sprang from a Sonia Lawson painting, 'Down Among The Empty Boats'.  My mind and eye are always interested in and open to art but it rarely produces a heart reaction in me.  Yet, when I entered The Mercer Gallery, my hand went instinctively to my chest. I was particularly drawn to the works depicting Muriel Metcalfe, Sonia Lawson's artist mother and, when I read the exhibition text, was surprised to realise that Sonia's mother had suffered from Graves' Disease, something I've been dealing with for the last 9 years.  Sadly her condition meant she was unable to look after Sonia for long periods of her childhood.  The poem is about illness and sacrifice and the woman's need to carry on for the sake of her child.  In December last year, soon after I wrote the poem, I had my thryoid removed so I expect the poem will always remind me of what I have lived through.
What would you like the reader to gain from reading Echolocation?
I hope every reader finds something in one of the poems that speaks to them or interests them in something new. Beyond that, I would hope the reader might gain something from reading the pamphlet that I couldn't predict.
Several of the poems in Echolocation are inspired by paintings and other works of art, which piece of art is your current favourite? Do you have a recommendation for a gallery or place for readers to visit?
My current favourite is a Sonia Lawson artwork, not the one mentioned above but a stark pencil sketch of her mother, crouched over as though in deep emotional pain. A small child stands as far away as the paper allows, watching her. I'm sorry to say I can't find the title of the work.  It's an accomplished sketch but, as above, it's not the aesthetic quality that makes it stand out for me, it's the personal connection.  It made me feel sad about the ill health my son has had to witness in me and that I had to witness in my own mother.
The Hepworth Wakefield set up by Barbara Hepworth's family is a wonderful gallery and brilliant at showcasing the work of contemporary female (and male) artists.  It also has an amazing learning department - I'm sometimes lucky enough to run workshops there.
Could you suggest a writing exercise or prompt?
This is an exercise Steve Toase and I used for our Haunt project with Imove and people experiencing homelessness.  I'm suggesting this one because it might encourage people to look at Sonia Lawson's work.

Find something in one of Sonia Lawson’s paintings that speaks to a formative life experience you have had or a story you tell about yourself.  What is it about the painting that makes you think of it?  Does this painting offer any clues as to how to transform this experience into a positive experience (if it is not) e.g. through particular motifs or colour or even brushstrokes e.g. wings to escape, arcs to carry the weight and suggest rainbows and hope?
Can you find a way to connect your experience and the artwork in a poem?