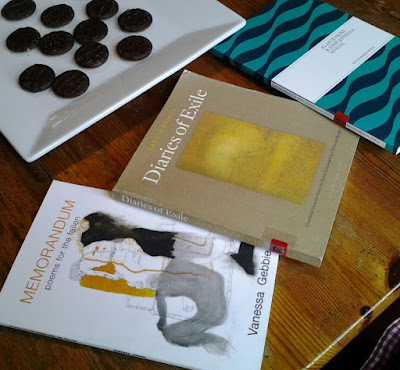 I've been reading novels recently and it has been a while since I wrote about poetry reads so I'm glad to get back to it.

I have three poetry books on the go at present; Diaries of Exile by Yannis Ritsos, Memorandum poems for the fallen by Vanessa Gebbie and Marine by Alan Jenkins and John Kinsella.

It's thanks to the work of translators Karen Emmerich and Edmund Keeley that I've discovered the work of Yannis Ritsos. He wrote the poems in Diaries of Exile between 1948 and 1950 which he was a political prisoner. They illuminate the life around in the prison camp and the hopes and fears of the prisoners. The poems become shorter and shorter as his exile continues. I wonder if he was running out of energy, or perhaps there was less paper or conditions had become harsher or all of these things. I admire anyone for writing under these conditions.

During May I've been re-reading Memorandum, by my friend and fellow poet, Vanessa. As has been told before we wrote poems inspired by the Frist World War alongside each other but though the poems in the book are familiar I find like all the finest work you gain a new perspective by going back and re-reading them. Vanessa's book is one of the choices for May's War and Literature Readalong.

My other book is Marine, published by Enitharmon Press in 2015. It resulted from an unplanned collaboration between Alan Jenkins and John Kinsella who discovered they were both writing poems inspired by the sea. My favourite poem so far after a rapid first read is Albatross (after Baudelaire)
Posted by Caroline at 14:35

I'm looking forward to discussing the poems.
You both approach it so differently, which is fascinating.