Today it’s the launch of Convoy in London on board HQS Wellington but I’m also remembering my Mum who would have been eighty. She grew up during the second world war and a number of the poems in the book are in her voice. She always encouraged me to write even at times when she wasn’t that keen on what I was writing about, including my first poem which was published by Faber. She was delighted about the publication but the rather teenagery poem was written from the point of view of an anorexic. I think however she would like Convoy and would probably agree that it was time we recognised the wartime contribution of merchant seaman like her father.

She left North Wales for London in the 1950s to train as a nurse, met my father and got married. 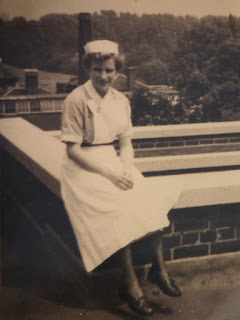 The wedding had to be delayed as her Dad’s ship was stuck the wrong side of the canal during the Suez crisis and she wanted to wait until he was home.  She lived in Norfolk and then Hampshire and worked as a primary school teacher in Salisbury. This was her ideal job as she loved small children and wasn’t bad at dealing with older ones either, even when they turned into stroppy teenagers. 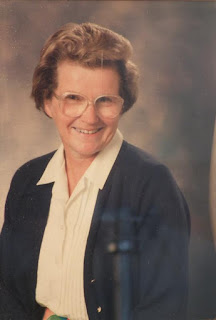 Thanks Jane. The launch was brilliant.

A love story. Where did your Mum train as a nurse? Looks like Barts, but maybe everyone's uniform was similar at one time.

How was your launch?

My Mum worked at Westminster Children's Hospital but when she and I went to look for the site in the 1980s it had become a private hospital. She either trained there or at St George's and sadly she's no longer alive for me to ask her.