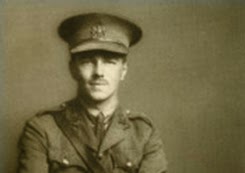 On 31st October 1918 Wilfred Owen was safe behind the lines and writing home to his mother about the place in which he and his men were staying.

"Dearest Mother,
I will call the place from which I'm now writing "The Smoky Cellar of the Forester's House". I write on the first sheet of the writing pad which came in the parcel yesterday. Luckily the parcel was small, as it reached me just before we moved off to the line. Thus only the paraffin was unwelcome in my pack. My servant & I ate the chocolate in the cold middle of last night, crouched under a draughty Tamboo, roofed with planks. I husband the Malted Milk for tonight and tomorrow night. The handkerchief and socks are most opportune, as the ground is marshy, and I have a slight cold!
So thick is the smoke in this cellar that I can hardly see by a candle 12 inches away, and so thick are the inmates that I can hardly write for pokes, nudges, and jolts. On my left, the Coy. commander snores on a bench, other officers repose on wire beds behind me. At my right hand, Kellett, a delightful servant of A Coy. in the Old days radiates joy & contentment from pink cheeks and baby eyes. He laughs with a signaller, to whose left ear is glued the receiver; but whose eyes rolling with gaiety show that he is listening with his right ear to a merry corporal, who appears at this distance away (some three feet) nothing [but] a gleam of white teeth & a wheeze of jokes.
Splashing my hand, an old soldier with a walrus moustache peels & drops potatoes in the pot. By him, Keyes, my cook, chops wood; another feeds the smoke with the damp wood.
It is a great life. I am more oblivious than alas! yourself, dear Mother, of the ghastly glimmering of the guns outside & the hollow crashing of the shells.
There is no danger down here - or if any, it will be well over before you read these lines.
I hope you are as warm as I am, as serene in your room as I am here; and that you think of me never in bed as resignedly as I think of you always in bed. Of this I am certain you could not be visited by a band of friends half so fine as surround me here."
Ever Wilfred X

He was killed on 4th November, together with Second-Lieutenant James Kirk who was posthumously awarded the VC and twenty two others.

The citation for James Kirk reads


An extract from "The London Gazette," No. 31108, dated 3rd Jan., 1919, records the following
" For most conspicuous bravery and devotion to duty North of Ors on 4th Nov., 1918, whilst attempting to bridge the Oise Canal. To cover the bridging of the canal he took a Lewis gun, and, under intense machine-gun fire, paddled across the canal on a raft, and at a range of ten yards expended all his ammunition. Further ammunition was paddled across to him and he continuously maintained a covering fire for the bridging party from a most exposed position till killed at his gun. The supreme contempt of danger and magnificent self-sacrifice displayed by this gallant officer prevented many casualties and enabled two platoons to cross the bridge before it was destroyed."