As the year draws to a close I wanted to mention some of the lovely things that have come my way in this mostly unlovely year for me personally.

One of my favourites of the autumn was Leaving the line – Images and words of War and Wondering. This is a Bristol based project created by Tania Hershman, writer, flash fiction creator, poet and Jeremy Banning, military historian and battlefield guide extraordinaire. Their idea was to create a series of twelve postcards inspired by images and stories from the First World War.

They were gathering material while we were out in France and Belgium in October on the fourth writers trip organised by Vanessa Gebbie – Tania had that bright eyed, cocked head look of a Robin that has just spotted something worth investigating and turning over. So I was interested to see what the postcards would be like.

When the set of cards dropped through my letterbox in November my reaction was Wow. 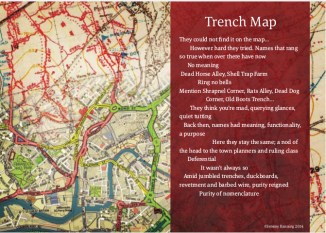 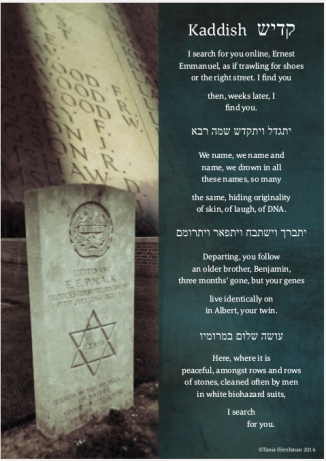 There have been many commemorative projects during 2014 but this one was special.

The words on the cards are written by Jeremy (four cards) and Tania (eight cards) and there is more information on the back of each card about the context. They are an example of what poetry does best; some poems will make you want to cry, Kaddish, others will teach you something The things they carried, and they will all - Unmemorial, If he was here now he’d say - make you think about what commemorating the war can mean.

You can see all of the cards here and listen to Tania and Jeremy talking about their collaboration and about stepping into each other’s worlds.