As well as reading Wilfred Owen’s poetry over the summer I’ve been engaged with ‘In Parenthesis’ By David Jones for the last year. His monumental work which towers over much else written in the early part of the last century.

I started after returning from a trip to the Somme last autumn during which I realised I did not know enough about the ordinary every-day experiences of the men on the Western front. David Ones was with the 15th Battalion, Royal Welch Fusiliers and a large part of his motivation for writing In Parenthesis was to remember and honour the men he fought alongside.
He began the book in 1928 and it wasn't published until 1937 so my spending months getting to grips with it seems only fitting. It is a great poem, T S Eliot who was responsible for publishing it described it as a work of genius. I recognise that this might put some people off. Several people told me it was ‘difficult’ but I found it far easier to relate to than other long poems of that era like The Waste Land. It has a strong narrative thread which pulls the reader through the poem. It begins with the Army in training in England - they get told about Mills bombs or rather "the new Mills Mk. IV grenade, just on the market...". There are no crowds to cheer them on their way to France because "it was late in the second year", December 1915 and already the war has gone on too long.

In common with the Waste Land it is studded with footnotes in which Jones explains some of the military terms, his use of cockney rhyming slang, and the poems which influenced his writing including Y Gododdin and The Ancient Mariner. Jones notes that the Ancient Mariner this poem was much in my mind during the writing of Part 3. I like the footnotes although I'm tended to read each part straight through first for the sound and feel of it.

As the summer and my reading progressed I wrote
“I am finding it harder and harder to put down.”

Updated end of September
I'm now reading with an increasing sense of dread. They are at the front and

p121 "Dai Davies and the Sibyl do agree - and they reckon we're in the first wave, for sure"

p131 "They moved within the hour, in battle-order, in column of company where the road cut a face of downland chalk....
After an hour they halted; to move forward with long extended intervals between each platoon, but before they left their gully, for the wide ridge, they halted again, to advance by section...
Now in this hollow between the hills was their place of rendezvous."

Early October – Reading Part 7 of the poem I am finding I have to break off from this final section to walk around the house and to remember to breathe. Men are being picked off on either side of him.
Some like the recently married Wastebottom die quietly;

“He maintained correct alignment with the others, face down, and you never would have guessed.”...

“Talacryn… a-slither down the pale face – his limbs a girandole at the bottom of the nullah,
but the mechanism slackens, unfed
and he is quite still”...

Then they are into Mametz Wood (not named in the book) and he kills an enemy soldier who has tried to kill him with a stick bomb, by flinging a grenade (probably one of those mills bombs he was taught about earlier) into the underbrush

p169 “you scramble forward and pretend not to see,
but ruby drops from young beech-sprigs-
are bright your hands and face.
And the other one cries from the breaking-buckthorn.
He calls for Elsa, for Manuela”

What are left of the company of men have to

“assemble your entrenching-tool parts and dig-in where you stood,”

But they are still being killed -

“and the next one to you, where he bends to delve gets it in the middle body… how could you stay so fast a tide, it would be difficult with him screaming whenever you move him ever so little…”

“The First Field Dressing is futile as frantic seaman’s shift bunged to stoved bulwark, so soon the darkling flood percolates and he dies in your arms.”

For the narrator there’s no time to pause, much less grieve.

“And get back to your digging can’t yer
this aint a bloody Wake.”

I finished the book with the feeling of having been there with these men.

Then last weekend I went back to France in the company of other writers including Vanessa Gebbie, of ‘The Coward’s Tale’ fame. She and I walked in the footsteps of the battalions in steady drizzle last Sunday morning. We went past the Devonshires trench into Mametz, down through the village, past Danzig valley cemetery. There was a brief exchange of text messages with our guide Jeremy Banning who advised us to ‘march on’. So we continued towards Mametz wood. Behind us in a dip in the ground was Queen’s Nullah where there was a casualty clearing station which like most of them must at times have been overwhelmed by the numbers of men being brought in.

We caught up with the rest of the group who’d gone on ahead by car, just before the Red Dragon memorial. By then Vanessa and I were both dripping with wet but I’d taken the precaution of keeping my copy of ‘In Parenthesis’ in a plastic bag in my rucksack to keep it as dry as possible. 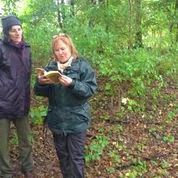 The corner of Mametz Wood where David and his company attacked has changed very little in a hundred years. Slit Trench is still there in outline on the ground and it’s dark under the trees. It was eerie and also uncomfortable as surely Mametz wood was the last place he’d wish to be taken back to. I hadn’t expected to walk so much in his footsteps. Should have known better and remembered that Jeremy would get us as close as is humanly possible. Not only is it dim and gloomy with the German trench just ahead but you can’t see out, nor is your command able to follow the progress of the fighting once the wood has swallowed you up. 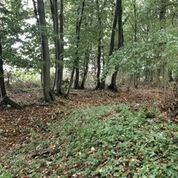 p180
“But which is front, and which way’s the way on and where’s the corporal and what’s this crush and all this shoving you along, and someone shouting rhetorically about remembering your nationality –
and Jesus Christ-they’re coming through the floor,
endthwart and overlong:
Jerry’s through on the flank. . . and: Beat it!-
that’s what one said as he ran past:
Bosches back in Strip Trench-it’s a
monumental bollocks every time
and but we avoid wisely there is but death.”

Jones is wounded and has eventually to abandon his rifle and how cold and clammy I feel as Vanessa reads the passage in which he describes this moment of leaving it under the oak.

You will have to buy your own copy of In Parenthesis and read it.
Posted by Caroline M Davies at 15:56

There's a useful summary of Jones' career on the PIP (Project for Innovative Poetry) Blog http://pippoetry.blogspot.co.uk/2013/02/david-jones.html