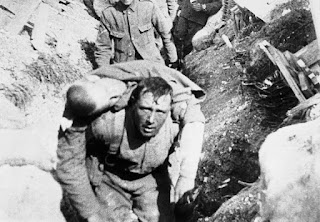 The Poetry School has been given permission by the Imperial War Museum for a public screening of the Battle of the Somme film at the Cinema Museum, London on Saturday 4th February 2017.
A group of ten poets, including myself, guided by Simon Barraclough and Julia Bird, have been working on poems written in response to the film.  The poems have been woven together into a script for us to perform on Saturday before the film is shown. 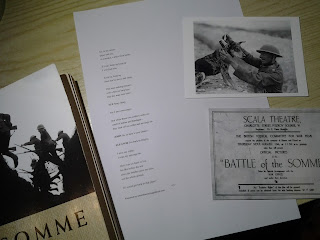 I’m currently learning my lines. My poems feature a dog which you glimpse for a couple of moments in the film running alongside the columns of marching men, and Lt Geoffrey Malins who was one of the two cinematographers who made the film ready for its first screening on 10th August 1916. The Battle continued until November of that year and the silent black and white film was seen by twenty million people.

My fellow poets are Anna Kisby, Chrissy Williams, Eleanor Penny, Jo Young, John Haney, Patricia Ace, Roy McFarlane, Steve Kendall and Sue Burge. As I work through the script I've been marvelling at how much has been included and the different approaches that people have taken. . It feels like an honour and a privilege to be taking part.