The year in books Part One

I’ve decided to look back over a year of reading rather than producing my list of books of the year and therefore things that you should read too! There are books which I’d recommend but it’s up to you as many of us have more books to read than hours in which to read them.

The year began and ended with Mary Renault’s The Charioteer, which I re-read at the turn of 2012 and start of 2013 in company with a group on Good Reads. Then as an early Christmas present BBC Radio 4 had Anton Lesser reading a severely abridged version of the book but he read it so convincingly with seemingly a different voice for each of the characters. I’m hoping it will be available as an audio book so that I can listen to it all over again.

During January 2013 I was putting the final touches to the manuscript of Convoy. Well actually I was panicking over whether it was good enough to let my publisher have it so I kept going back to my shelf full of Malta books. You can read blog posts from earlier in the year to discover my favourites amongst these books including those by Tom Neil and Laddie Lucas.

I managed a couple of times during the year to take part in the War and Literature Readalong organised by Caroline of  Beauty is a Sleeping Cat blog. It provided the motivation to read Kevin Powers fragile butterfly of a book – The Yellow Birds and I’m currently late with finishing the final book The Sorrow of War by Bao Ninh, because it is so moving and humane I don’t want to rush it

As you might expect my year’s reading had lots of poetry in it. Hearing Sharon Olds read from Stag’s Leap at the TS Eliot prize event in January was a highlight of the year, as was her book. 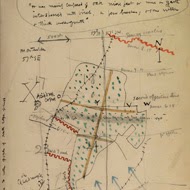 During the year I took a long time over David Jones In Parenthesis – his long poem about the first world war. It was a reading which gathered momentum as I followed the journey of the soldiers over to France, in training and then moving up to the front line and then on to Mametz wood where for many of them their lives ended. My own copy of In Parenthesis is now dog eared and got considerably water logged in October when I took it to Mametz to read n the company of Jeremy Banning and the Writers Pals; Vanessa Gebbie, Zoe King, Tania Hershmann and Sarah Salway.

I think Jones would have been somewhat bemused at the thought of his book being taken back there where he had to abandon his rifle under one of the oaks. I like to think he’d also be pleased that his work is still remembered. If you haven’t already read In Parenthesis I would encourage you to do so and you are allowed to take months to do so.

Tony Conran died at the end of January 2013 and it seemed fitting to remember him by reading his elegy for the Welsh killed in the Falklands and here is an extract. You can read the whole poem in The Shape of My Country.

Elegy for the Welsh Dead, in the Falkland Islands, 1982

(Men went to Catraeth, keen was their company.
They were fed on fresh mead, and it proved poison.)

Men went to Catraeth. The luxury liner
For three weeks feasted them.
They remembered easy ovations.
Our boys, splendid in courage.
For three weeks the albatross roads,
Passwords of dolphin and petrel,
Practised their obedience
Where the killer whales gathered,
Where the monstrous seas yelped.
Though they went to church with their standards.
Raw death has them garnished.
Posted by Caroline M Davies at 17:02