The Half Life of Fathers 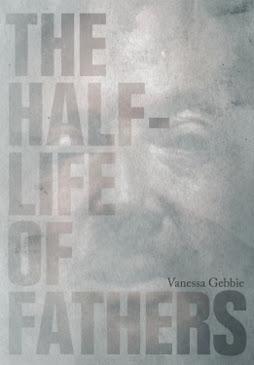 Today I’m delighted to welcome the multi-talented Vanessa Gebbie to my blog. Vanessa is the author of The Coward’s Tale, published by Bloomsbury,  Words From A Glass Bubble and  Storm Warning  two short story collections published by Salt, editor of  Short Circuit, A Guide to the Art of the Short Story which has recently gone into a second edition, winner of many awards and facilitator of writers’ workshops and retreats. Most importantly her first poetry book, The Half Life of Fathers has just been published by Pighog Press.

My first question is how does poetry fit in with the rest of your writing and how do you make time for it?

Hmm, that isn’t an easy question to answer, in that I don’t ‘make time’ for poetry, really. If something arrives and is a poem, it gets written down whether I am in the study (unusual), doing something other than writing, thinking about something else (more usual), or reading poetry by others (even more usual). I do however ‘make time’ for writing in general. It’s ‘what I do’, so most of my time is devoted to some aspect of writing, whether it is creating, revising, editing, teaching, or reading.

Do you consciously look for subjects for poems or do poems come to you? In short what inspires you?
If you examine too closely that which inspires you, asking of it why it does, it loses some of its magnetism. Not sure why that is - maybe something to do with a weight of expectation. ie, me expecting to write something ‘worthwhile’ - so is it deliberateness that undoes the creativity? Having said all that, there are some things that never fail to move me, make me want to explore, record, whatever it is we are doing when we write. Human endeavour/ human courage is hugely inspirational - and that manifests itself most perfectly the more I discover about the ordinary men and women who were caught up in the Great War. So, knowing that, I do make a conscious effort to surround myself with that particular inspiration - by visiting the battlefields with other writers (as you know!), by reading, and doing my own research for prose projects.  Other inspirations tend to be non-categoriseable. Just experiences that make me feels something, I guess - so I also feel the need to capture it in words.

How long did it take you to write the poems which are in the Half Life of Fathers? When you were putting together the collection how did you decide on the order of the poems and were there any which had to be left out?

I suppose the answer to that is, as long as I have been writing poetry - so some six years or so. At no point did I ever think, ‘I am writing for a collection’, as most of my poems never got sent anywhere, just the odd few. The rest were forgotten about in the depths of  the computer. When the collection was eventually on the chocks, I had to look at the overarching themes of those poems. They tended to fall into groups - lost places, lost people - especially my own father -  and responses to the battlefield trips, or other manifestations of war - notably some Rolls of Honour.
Ordering them - it made sense to begin with a poem that encapsulated the theme of ‘The Half-life of Fathers’ - en elegy to a friend, whose legacy will remain with me through his poetry and his encouragement, as well as happy memories of his maverick nature. It made sense to keep the war poems together, to keep poems about my father’s final decline into dementia together, and to keep a loose grouping of lost places and lost family snippets together. I read somewhere about the importance of the first lines of the first poem of a collection, and the last line of the last.  Hopefully, there is a coherence between the two.
There were plenty I decided not to include! For no reason other then they weren’t good enough, to my eye/ear.

It can be notoriously difficult to get a collection of poems accepted for publication, do you have any advice for someone else who is sitting with a pile of poems and wondering what to do with them?

All I can suggest is what I did, because it worked for me - send  what you believe to be ‘the best’  to good poetry publications, and to competitions. It was a competition success that gave me the impetus to seek a publisher for a first pamphlet. That begs the question, ‘how do you define ‘the best’? For me, it was those pieces that still made me feel again, long afterwards, the intense emotion I felt as I wrote them.

Unlike novels there doesn’t seem to be a ready-made audience of people willing to buy and read poems. What about this particular set of poems would pique the interest of the general reader.

You can understand them! I enjoy poetry I understand at first meeting, as well as that which reveals more layers on re-reading. But that initial meeting with the poem is like meeting someone for the first time. If they go out of their way not to communicate, to make you feel stupid, why would you want to waste any more time on them? If they are interesting, you sit down and engage in conversation, and maybe discover a few unexpected things.

And finally this is the dinner party question but since it is nearly Christmas rather than asking which six poets you’d invite over for supper I was wondering which poets, living and dead would be on your Christmas card list?

Can I go back to the dinner party model? Christmas cards may not be entirely appropriate. And I’m sticking to those who are no longer with us - choosing living ones is far far too hard, and I don’t have a dining table big enough!

Quite right too. Who wants to be reminded of the dreaded Christmas card list a dinner party sounds much more fun. I'd like to come to this one as I can imagine the conversations. Dylan Thomas and Seamus Heaney will have read all the others poetry of course although I think it will probably be Seamus who makes sure that someone like Isaac does know that we are still reading his poems and remembering him. It would be good to get Rossetti, Rosenberg and Blake discussing London, what has changed and what has stayed the same. If I am allowed to come to the party I'd bring David Jones along with me who I'm sure would also be interested in telling us about his London. The evening will have to end with a poetry reading won't it? So your final task is to decide which poems they should read and in which order. I think we should end with the Song of Solomon myself