Thus far with these biographical sketches I’ve introduced you to my taid, my mother, a couple of RAF pilots and the captain of a merchant ship so now it is the turn of the army. Whilst doing the research for Convoy I was fortunate enough to make contact with Paul Lazell who owns a splendid website of photographs of Malta during the war. All the photographs were taken by his father who was stationed on the island from July 1941 until 1944. Rather like my grandfather, Paul’s dad is one of the unsung heroes of the war who just got on with what needed to be done. Paul has kindly provided the following account and a photograph of Bill taken in 1942. 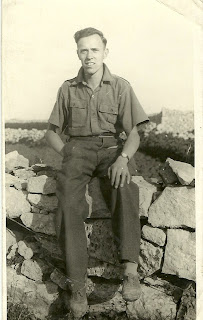 ‘Bill’ Lazell volunteered for the Royal Air Force in 1940.  His ambition was to serve with bomber command as a rear gunner. A very strange desire as he suffered from claustrophobia.
He declared his keen interest in wireless and photography.  As a result he found himself recruited into the Royal Artillery.  He was immediately trained on the then, top secret ‘radar’.

In 1941 he was dispatched, along with thousands of other troops on a convoy from Scotland.

The convoy was split in two.  One section was sent to Singapore.  Those troops were immediately captured by the Japanese.

The second half were sent to Malta.

Bill served with the 27th Battery, 7th Battalion  Royal Artillery.  He was a radar operator with a battery of heavy anti aircraft guns.. Whenever he had the chance, Bill used to man the twin Lewis Guns.

Bill and his colleagues saw the worse of the siege and relentless bombing of the island.  They had to dismantle the radar station roughly every 48 hours when their position was plotted by enemy aircraft and move to new locations.

Bill took literally hundreds of photographs on Malta between 1941 and 1944.  He also kept a daily diary of events throughout his stay.  I am proud to now own all of his photographs and diaries.

In 1944, when he returned to England, he married his childhood sweetheart, Joy (my mother).  They had two daughters in addition to myself.

He would have been immensely proud to have known how popular his photographs would become.  They have been published in a number of books and magazines, the most of notable of which being ‘Air War Malta’ and ‘Images of War, Malta GC’, both by Jon Sutherland and Diane Canwell.

How fitting that his photographs are being seen by others now. Lovely post, thanks.

It's great isn't it. All credit to his son Paul for making them available