Earlier in the year I promised to provide some biographical details about the men who are in the poems in Convoy. The only place to start is with my grandfather, Jim, taid as I called him (Welsh for grandfather). He was a merchant seaman all his life and first went to sea in 1919 at the age of sixteen, following in the footsteps of his older brothers Bob and Will.

I’ve already mentioned how the first poem came to me at one of Pascale Petit’s writing workshops and also how I thoroughly resisted the idea of writing about my grandfather and his wartime experience. I didn’t know anything about it. He’d hardly ever talked about it and all I knew was that it involved Malta. And yet once I had that first poem about what it might have been like to be on the deck of a ship under attack it seemed inevitable that more would follow. My uncle, also called James, had his Discharge book so I knew he was with the Blue Funnel Liner, the Ajax (not to be confused with HMS Ajax). I turned to the Maritime histories to find out about the convoys she had been involved in. Richard Woodman’s (another Blue Funnel line man) Malta Convoys provided a wealth of detail and the information that she had been stuck on Malta from September 1941 to Boxing Day that year. Rather a shame for as Woodman says (p274)

The Ajax… was equipped with such superb cargo-handling gear that she had discharged her lading within forty-eight hours of her arrival only to spend three months dodging about Grand Harbour, ending up moored at the head of Marsa Creek. Here, surrounded by the heights of Marsa, the ship’s company sheltered in an adjacent tunnel during air raids, leaving one watch on duty to man the ship. as they were forbidden to used their anti-aircraft armament because of the shortage of ammunition, it was a profoundly frustrating experience…”

So this was why when Taid did mention the war it was about Malta and the suffering of the Maltese people. I can remember being well and truly told off as a child for not eating all the food on my plate and being told the Maltese had to survive by eating rats. I’m still not sure if that story is true but as an adult I can understand his annoyance at my not appreciating how lucky I was.
I talked to my uncle, born after the war who remembers some more stories including one involving Taid and the captain of the Ajax arriving in Grand Harbour. Then a fellow poet, Peter Marshall, put me in touch with his father, John who sailed with the Ajax after the war. John sent a photograph of her arriving in Grand Harbour in February 1942 and in return I sent him a naval message from Operation Vigorous. Taid had helped himself to a paper copy of the message.

I started reading Tom Neil’s book Onward to Malta to find out what it was like to be on the island during 1941. He left on Boxing Day 1941 on board the Sydney Star. Hadn’t something happened to the Sydney Star earlier? Didn’t Taid mention her as being a fine ship? So by this stage I’m was surrendering. The universe seems to have decided I am going to write about Malta as there was not just my grandfather’s story but also all the other men. And as I have discovered many of these stories have been forgotten. Not by the Maltese who still commemorate the arrival of the Operation Pedestal Convoy and whose government honoured the surviving seamen by issuing a medal in 1992. My grandfather was immensely pleased to receive his medal not long before he died.

What would he have made of this book I wonder? I like to think he would have been proud and pleased. In lots of places I have had to imagine what it was like so I’m sure he would be able to find things I’ve not got quite right. I've never been to sea, never been under fire and never been to war. I expect like one of the RAF pilots he would tell me that what he did was nothing special. I disagree.

Today Jim would have been one hundred and ten years old and I leave you with a photograph of him and my Nain on their wedding day on 12th August 1932. 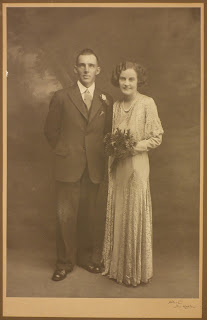 How interesting, Caroline! Convoy will be a super memorial for him. (Your grandmother's dress is to die for.)

This is fascinating Caroline. I can see why you were so engrossed in the writing and I am really looking forward to getting my copy of 'Cnvoy'

They do make a good looking couple don't they Judi and now I think about it properly my nain was always well dressed.

Engrossed is the word Mavis and not long to go now until Convoy is published.

Caroline, Hello. I also had a Taid and he was in the so-called Great War. What a young man from a remote hamlet in the mountains of Snowdonia who lived in a quarryman's cottage with no utilities and no back door and went regularly to a Methodist Chapel where it was preached that those who killed their fellow man would burn in hell was doing at the Battle of the Somme where 1,250,000 men were turned into compost for poppies you might well ask. Fortunately Taid managed to get himself sent home with trench knee otherwise I wouldn't be here to tell you the tale. I shall link to your excellent blog. Cheers, Gwilym

thanks for visiting and for the story about your Taid. Compost for poppies just about sums up the Battle of Somme.

have you been to the battlefields? As you'll see from earlier blog posts I went last autumn. It certainly brought home the enormity of it all