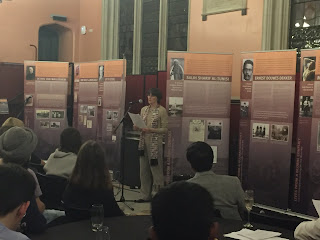 October has been a busy and productive month with four readings, culminating in the launch event for the CEGC 'Cultural Exchange in a Time of Global Conflict' project in the Maughan libraryat King's College London. I read three commissioned poems, inspired by the lives of Wanda Gertz and Frederik van Eeden. The other poets were Amarjit Chandan and Vanessa Gebbie with poems in English and Punjabi about the Indian soldiers who fought during the war. The exhibition continues until 17th December with poster displays of twelve people from a variety of backgrounds and cultures who were involed in the conflict.


In the middle of the month I was back on the Somme for our annual visit.I'm still ruminating on that trip and will post more about it later. The theme for this year was reburials of men who have only been found and identified during this century, at Fromelles and at the communal cemetery in Albert. The epitaph from one of the Fromelles headstone has stuck in my head.


I really enjoyed going back to Westbury arts centre at the start of the month to share some of the poems which had been inspired by the Open Studios. Then it was National Poetry Day and a chance to get involved in various poetic activities organised by Ian McEwen at Bedford library.

I also paid my first visit to Stantonbury campus for the opening of Neil Beardmore's exhibition of paintings 'Picture it in'. Neil had very generously invited me to join him for the reading and this provided the opportunity for me to try out some of the more personal poems of the last year. It was a bonus discovering that there was a production of Journey's End which is on tour across the UK until mid November. 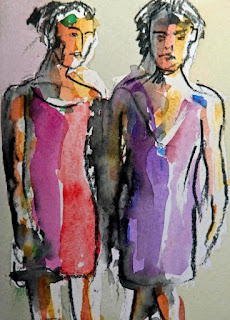 So I have reached the end of the month with a notebook crammed with scribbles so I'm looking forward to the forthcoming writing week in North Wales and a chance to turn them into something more like poems.