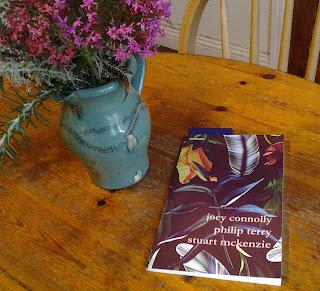 This Friday is the launch of the first of Laudanum's books, featuring the work of my fellow poet, Stuart Mckenzie. It also includes poems by Joey Connolly and Philip Terry.

I pre-ordered the book and have had it for several weeks. I was so pleased to see Stuart's work in print, having becoming familiar with it through workshops with Katy Evans-Bush.  I turned to his section ‘the dead weight of beauty’ first and took great pleasure in reading his sharply observed poems with his characteristic forensic eye for detail as you might expect from someone who works as a fashion illustrator. It’s not all fashion as the brief selection includes poems about growing up Birch Services M62 and rediscovering a relic in Action Man. My favourite is ‘After Snow’ which captures perfectly the vanishing of the transformation brought about by snow.

Laudanum is a new venture and the aim according to editor, Tiffany Anne Tondut, is to provide a niche for shorter works and to introduce new talent. An advantage of a combined chapbook is the opportunity as a reader to discover poets by association. After reading Stuart's poems I turned to ‘Du Bellay’ by Philip Terry, a sequence of sonnets sending up life as a head of department at the University of Essex. Each one is a 21st century answer to Du Bellay’s sonnets although you do not need to know this in order to be amused and there was much that was familiar from my time as a university administrator.


The final section is joey Connolly’s Moderns which are versions of previously translated poems by poets such as Lorca, Montale and Cavafy. In the latter case I knew the original poem ‘The God abandons Anthony’ and in Connolly’s hands it becomes two poems ‘Your Room at Midnight was suddenly’. I really liked the way Connolly plays with the ideas in the poem and in the second version how you might encounter the poem when
we sip our coffee and your eyes


are darker than any history or coffee, than any


Greek coffee ever was…
Posted by Caroline at 16:03