Commemorating the Battle of the Somme on a local scale

On the evening of first July my fellow poet, Neil Beardmore and I held a poetry reading at All Saint’s Church in Wing to remember the men killed on the first day of the battle of the Somme. In choosing which poems to include we went back to the words of the men who fought  from the well-known Siegfried Sassoon and Ivor Gurney to  the less familiar David Jones and Noel Hodgson and included in  the programme are the voices of women who did not have to go over the top and had the task of coping with the consequences of the war.  We also included response poems written by Neil, myself and Vanessa Gebbie. This was a small scale local event and not a grand affair like some of the other commemorations which took place across the UK and France but I wanted to do something quietly and by means of poetry to mark the day and to share it with other people. 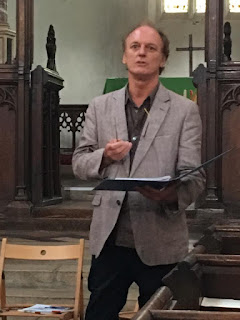 I am most grateful to Vanessa for allowing us to include Playing Trains about two brothers from Adlestrop. As I explained to the audience before reading, I find it difficult to read dry-eyed at any time and especially when reading it aloud to other people. It did seem, however, entirely appropriate to shed a few tears on the evening of the day we were remembering more than nineteen thousand men  who were killed on the opening day of the battle. We ended the reading with two minutes of silence.