The Menin Gate Memorial is where my great uncle Victor’s name is inscribed as one of the 54,389 men who are commemorated here. When I use the words ‘great uncle’ about someone who died nearly a hundred years ago your mind will probably conjure up an image of an elderly gentleman with Edwardian sideburns. Victor had just turned twenty when he was killed in July 1917, his birthday was in June so he was just out of his teens and only a few years older than my older child.

The Menin Gate is in the town of Ieper, known to the French speakers as Ypres and I expect that Victor will have called it Wipers like the rest of the troops.

During the day it is a thoroughfare with cars and buses and pedestrians passing through, going about their daily lives. In the evening it is closed to motor traffic for an hour for the sounding of the Last Post. This began in July 1928 as a gesture of gratitude from the Belgian people and the buglers came from the local fire brigade. These days it attracts crowds and people arrive in coachloads which is as it should be given how many men are remembered on all the walls. 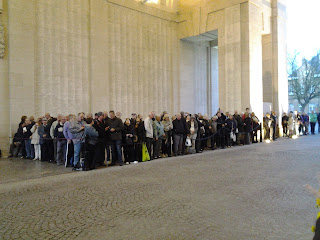 It had not occurred to me until I found R.V. Davies amongst all the names (eleven of the Royal Welsh Fusiliers with the surname Davies) that I was probably the first member of the family to visit. His mother was already a widow when he was killed and would not have had the money to go all the way to Belgium to look for her only son. I don’t think his younger sisters would have thought to go there.

Siegfried Sassoon hated it describing it in his poem  On Passing the New Menin Gate as ‘a pile of peace-complacent stone’. I wonder what he would have made of the fact that people continue to visit today looking for the dead. I have described my visit earlier on this blog and here is the poem for Victor.

For Victor at the Menin Gate

Where did you fall?
Somewhere out in the fields
the summer rain had turned to mud.

Where did you fall?
I cannot find the field corner
enriched with your Welsh blood.

Where did you fall?
There is only your name
among the thousands on a stone wall.

Where ever you fell,
I bring you a white rose, for peace,
Robert Victor Davies. 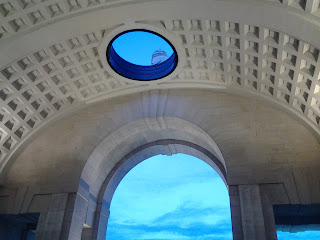