Pigeon Ravine on the Somme 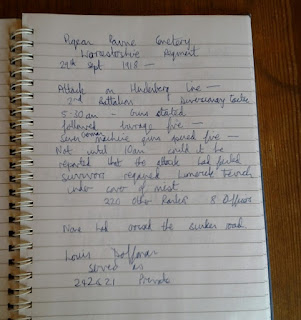 As I have been writing this blog post I came across my hand-written notes from October 2013 when Jeremy Banning first took me and other writers to Pigeon Ravine and I found Louis Doffman amongst the graves. I can’t remember now whether it was Jeremy who pointed out his headstone (as is his habit of making sure you notice things) or if the part of the inscription ‘served as 242421 Private’ caught my attention because it was an unusual thing to find written. There was more information in the CWGC register.

(served as MOUNTFORD). Son of Charles and Ellen Doffman, of 82. Broad St., Hanley, Staffs.
I assume that it was his parents who provided the epitaph for their twenty-seven year old son. He had been single at the time of the 1911 census and I have found no record of him having married.
Ever in our thoughts
God’s will be done 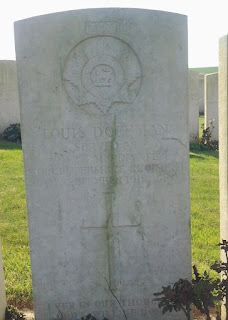 As far as the official records are concerned Louis remains as Lewis Mountford I have no way of knowing if any of the rest of his company knew that he was really Louis Doffman but I assume he kept quiet about his German sounding name which would have made him a figure of suspicion.

The word ‘Ravine’ might make you think of hills and valleys but the landscape in this part of the Somme battlefields is level ground. It reminded me of how the farmland changes and flattens as you leave Bedford and head east towards Cambridge and the Fens.

You can see for a long way (unless there is fog and mist).

From Voices from Stone and Bronze 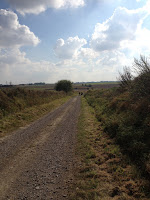 As you will observe from my notes this attack by the 2nd Battalion of the Worcestershire Regiment happened quite late in the war, at the end of September 1918. Of course the men who were fighting for the Germans and the British did not know the war would be over two months later.
The Pigeon Ravine cemetery is a typical battlefield cemetery where the men were buried very close to where they were killed and all buried together as a company.  I like to think that they will have been buried with a ceremony rather than hastily interred. The cemetery was created in October 1918 by the 33rd Division Burial Officer. It contains 121 known graves, the majority of whom were killed on 29th September 1918. The youngest was 18 and the oldest was a Lance Corporal named Robert Vincent Beare was 41.

After the war and as the French regained their farms the remains in some of the smaller cemeteries  were moved into larger cemeteries but Pigeon Ravine was left as it was.

It looks so similar to Cambridgeshire that it all feels very familiar to me (I was born in the fens and still have lots of family there.) Very odd to read the the word 'ravine', though!

I suppose any slight dip and hillock in the rolling fields took on a life-and-death importance, either as shelter from or exposure to bullets. In Jeremy's pic it looks as though the whole cemetery is tipped away from the viewer - I wonder if thats where most were sky-lined as they came over the rise.

I was born in King's Lynn Helen but my family were from North Wales.

Even a small dip in the ground could save your life in 1914-18. I can remember Jeremy showing us a field where he'd taken one of the veterans many years ago and this veteran recognised the place where he'd taken cover even though to the casual observer it did not look large enough to hide a man.

Yes, that was the field in front of High Wood. I remember it well - the 'dip' was so slight - but with the gradual rise of the terrain towards the wood, any variation in the gradient became worth noting - for good or ill.