Our sons as well at New Venture Theatre Brighton


“Those heroes that shed their blood and lost their lives. You are now lying in the soil of a friendly country. Therefore, rest in peace. There is no difference between the Johnnies and the Mehmets to us where they lie side by side here in this country of ours. You, the mothers, who sent their sons from far away countries wipe away your tears.Your sons are now lying in our bosom and are in peace. After having lost their lives on this land they have become our sons as well”. Kemal Atatürk 1934 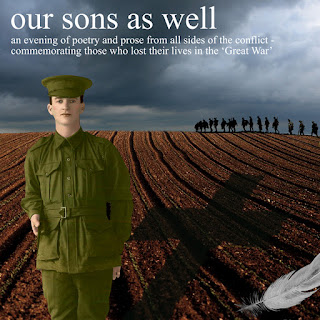 These words of Atatürk provided the foundation of an evening of poetry and prose from the Great War at the New Venture theatre in Brighton earlier in March. Impresario Tamsin Mastoris put together a stunning programme mixing the familiar, Owen’s Anthem for Doomed Youth and Strange Meeting with the less well known including women’s voices, from millworker Kitty Eckersley to diary extracts from German artist Käthe Kollwitz. It had the audience gripped as we were taken from the outbreak of war when women and men were caught up in the urge to play their part, through the impact of the war on families to the aftermath of the war in which so much had changed. It was a full programme and an intense evening. The enthusiasm of everyone associated with the production came through in the way they performed all of the forty six pieces. My personal highlights were hearing about second Lieut Herbert Percy Webb, R.F.A from Debz Sebborn, Siegfried Sassoon’s Statement of Military Defiance read by Colin Elmer and Eleanor Gamper reading Conscientious Objector by Edna St. Vincent Millay

I will not tell him the whereabouts of my friends
nor of my enemies either.
Though he promise me much,
I will not map him the route to any man's door.
Am I a spy in the land of the living,
that I should deliver men to Death?
Brother, the password and the plans of our city
are safe with me; never through me
Shall you be overcome.

The theatre is a Victorian building and has a well loved feel. I am a fan of studio spaces where you are close enough to the actors to feel fully involved. The final act began with a taster of the forthcoming production ‘How many miles to Babylon’.  I particularly enjoyed hearing poems from Vanessa Gebbie’s Memorandum especially the concluding performance of the evening which was David Bury – poem for seven voices – performed by the men of the cast. Thanks to a suggestion from Vanessa suggesting one of my poems ‘In the Royal Pavilion Hospital in September 1915’ was included. It was fascinating to hear my work read by someone else, actor Edward Cave. I liked the way he tackled the opening line with an emphasis on the first phrase ‘Here I am’ making it a declaration. When I read it myself I tend to stress the ‘being cared for’ but I liked his approach. It was good to hear it in a man’s voice.

Edward Cave is one of the actors in the forthcoming ‘How Many Miles to Babylon’ based on Jennifer Johnston’s novel. This most topical play set in France and Ireland would be well worth catching if you are in Brighton from 8th – 16th April.
Posted by Caroline M Davies at 20:48