The Year in Books Part Two


I spent the summer and autumn reading and re-reading Wilfred Owen’s poetry, again in company with friends on Good Reads. Gillian Clarke puts it much more eloquently than me writing on the Magma Blog  when she says “Owen’s words, read once, are unforgettable almost a century after he wrote them.”
The on-line Getsparked project allowed me to introduce Traci Robison, someone who had never read his poems, to his work and she produced the most gorgeous painting inspired by Dulce et Decorum est. I ended the year of reading with Dominic Hibberd’s Wilfred Owen: The Last Year.

An unexpected delight of the year was Samuel Pepys. One of the reads for my local book group was Claire Tomalin’s magisterial biography. With one of those touches of serendipity that the universe is fond of I discovered at the same time that Caroline Gilfillan’s collection of poems, Pepys which capture the spirit of the man.

If you put water or anything to do with the sea into the title of your book then there’s a good chance I will pick it up. So no surprise that Rebecca Gethin’s A Handful of Water was one of favourite reads of the spring. In case you’re wondering I do occasionally read novels as well and during April I read Charlotte Rogan’s The Lifeboat back to back with James Hanley’s The Ocean. The set up for both novels is the same – a group of people who was ship-wrecked and end up together in a lifeboat. Rogan’s is a compelling page turner of a read. I had only picked it up in the bookshop to admire the cover and found myself unable to put it down after reading the first few pages. 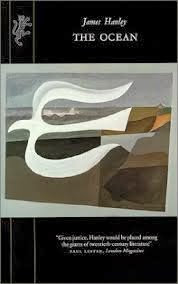 The Ocean was first published in 1941, my copy was the Harvill Press re-issue published in 1999. The contrast with The Lifeboat is profound. Hanley, like my grandfather was a seaman. Born in 1901 he was a near contemporary of my taid and Hanley spent nine years at sea and how it shows in the writing of The Ocean. There are only six of them who make it onto the lifeboat in panic of getting off the Aurora when she’s torpedoed just after midnight. One of them, Crilley is killed immediately when the lifeboat is machine gunned and he protects the water keg from being holed. The main character Joseph Curtain explains p12 “When they machine gun a boat like this there’s always a chance of them drilling holes in your water supply. These days they don’t kill you directly, but if you plug a water keg with bullets then you kill everybody…” I don’t know if Hanley was ever on board a ship which was sunk but his novel reads as if he may well have been. He is someone whose work I want to read more of in 2014.

Having read The Stalin Organ in 2012, (another War and Literature choice) I read Gert Ledig’s second novel, Payback in the summer. Both books are based on his own experience as a German soldier in the Second World War and are important albeit searing accounts. Payback deals with a night in which an unnamed German city is bombed by the Allies with appalling consequences. I have Alexander Voinov to thank for persuading me to take Payback out of the ‘to-read’ pile. Voinov has written two books, Skybound and Unhinge the Universe from the German point of view in the last world war. These are romances and far gentler reads than Ledig. Ledig published a third novel, Faustrecht in the late 1950s which has yet to be translated into English. So I shall have to blow the dust off my rusty German to read it.

One of the pleasures I rediscovered this year was being read to. In this day and age that means audio books and Chris Patton reading Josh Lanyon’s Adrien English series. How very American he sounds I thought on listening to the first, then realising that in my head I’d given Lanyon’s characters English accents. An absolute treat was discovering Anton Lesser reading Wilfred Owen’s poems which was a very early Christmas present to myself.

Another of my page turning reads was Michael Crawshaw’s To Make a Killing, a thriller, a whodunit set in the City of London where one by one bankers are being killed. This pulls off the neat trick of making you see them as ordinary human being rather than the hate figures they’ve become in the popular media. Crawshaw worked in the City so he knows his stuff including the difference between a banker’s bonus and  a lock-in payment. Mike is a friend. We meet up every summer with our children at a family camp in Derbyshire but this was the first year when we each realised how seriously the other takes writing. So proceeds from the book go to support the Hands Together project in Nepal.

I dipped into Emily Dickinson and Walt Whitman in the early autumn. I’d registered for an on-line course on Modern and Contemporary American poetry only to realise life was too busy with work, family and my own writing for me to keep up. I did make it down to Brighton for the launch of Vanessa Gebbie’s Half Life of Fathers. Having seen this collection take shape it was one of my poetry collections of the year. Another which I frequently took down off my shelves was John McCullough’s Frost Fairs. I discover another favourite poem in it every time I re-read it. Thanks to Anne Ystenes I’ve been introduced to the work of Olav Hauge, a Norwegian poet. His work is available in translation in the UK and US by luminaries like Robert Bly although I’ve enjoyed rather reading Anne’s careful word for word translations alongside the original Norwegian. His poems are full of hjarta (heart) and havet (the sea, the ocean).

During the year I got into the habit of carrying around poems in my bag. The first was Antoine Cassar’s Passaport which looks quite like a passport although it’s not so much a poem as a project to make us all think about borders, boundaries, immigration and emigration. I even had the temerity to offer it to a UK Borders official on my return from France in October. He did reach for the unofficial passport first, puzzling over it before deciding he did really need the one with all the stamps in it.

Thanks to Sabotage Reviews I discovered Sarah Hymas Lune – a foldout poem about the sea at Morecombe bay which has people coo-ing over it whenever I produce it out of my bag.