A summer with Wilfred Owen

I am due to go back to the Somme this autumn with a group of writers, the tip being organised by Vanessa Gebbie and led by our guide Jeremy Banning. So I am spending the summer engaging with Wilfred Owen’s poetry. A poet whose work I have not studied since I was at school as a teenager although it feels as if his poems have been in the background for most of my life. The credit for coming up with the idea of a summer reading project goes to a writer, ‘good reads friend’ and librarian in Boston who suggested we could read his poems together. She is reading a good many other books as well. We are taking it ten poems at a time and the original plan was to have read most of his poems by the middle of August.

Alongside the poems I’ve also been discovering what Owen was like as a person thanks to Dominic Hibberd’s – Wilfred Owen A new biography. 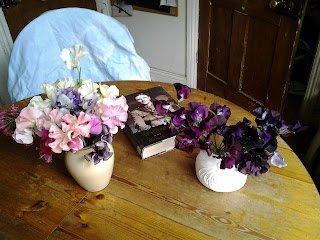 It was Hibberd’s edition of the poems that I read at school all those years ago so it seems entirely appropriate that he should once again be my guide. Somehow I had missed the obituary notices last autumn and was considerably saddened to learn that Dominic Hibberd had died. But what a gift he left behind him. It feels as if he must have known Wilfred personally and in a way I suppose he did. Here is what he has to say about Wilfred at Ripon in that final spring of 1918.

“Wordsworth had said that the poet is the rock of defence for human nature, and he had claimed that all good poetry arises from ‘the spontaneous overflow of powerful feelings’, allied to long and deep thought. The emotion is ‘recollected in tranquillity’ until it recreates itself in the mind and a poem begins to grow. Wilfred knew that the recollecting and thinking had to be done, but it was going to be a dangerous business. In all the history of English poetry, there can have been few braver, more extraordinary undertakings than his at Ripon. His double duty was now clear: as an officer, he had to return to the front; as a poet, he had to write about it. By day he trained for the fighting that would probably kill him, and in the warm spring evenings he walked down a quiet country lane to his secret retreat, a windowless room where he could open his ‘inward eye’ to the experiences that had almost driven him mad a year earlier. There was pleasure in it, as Wordsworth had promised, the pleasure of being driven by the poetic impulse and using a fast-developing talent to the full, but there was also terror. Alone and with no support, Wilfred summoned up the phantoms of the mind, and as they gathered in the shadowy corners of the room, he forced them to show themselves and obey his will.”
(Hibberd p309)
Posted by Caroline M Davies at 18:14