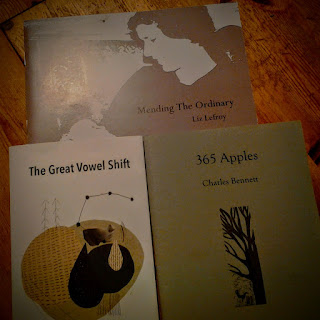 These are a few of the books I bought earlier this autumn at Free Verse and the Cinnamon tenth birthday celebrations. I'm following the example set by Robin Houghton on her blog of reading from first poem to last poem so it seemed appropriate to start with her pamphlet The Great Vowel Shift published by Telltale Press

This is a slim pamphlet of thirteen poems, which is beautifuly made with a wrap around dust jacket and collage cover illustration by Hannah Clare. It is Robin Houghton's debut poetry pamphlet. She has also written guides on how to blog. These are poems about loss – ‘The Last’, Ellipsis, and Fermata- and moments of epiphany. These poems were so good it reminded me of how difficult it can be to get a full collection published.

Favourite poem 'The Last' because you have to read it all the way through before you realise what the poem is about and then you have the pleasure of reading it again.

The title of this pamphlet can set you off down the wrong track as it is not about 365 varieties of apple but 12 months (or 365 days) from January to December. Charles Bennett spent a year visiting Dragon Orchard In Putley, Herefordshire and responding to the orchard in poems. The poems are a delight, a celebration of the trees, the people who grow them, the bees who visit the flowers, the passing of the seasons and the natural order of things. Bennett explains in the foreword about spending a few days each month in the orchard (lucky man) and says

“My time in the orchard … consisted of walking and being attentive, of looking and listening and letting my senses and imagination be opened and operated upon by the orchard. You might say that in a sense the orchard walked through me.”

And through the poems you can walk with him and the orchard. My favourite poem is April, which ends with the lines

the bees who snuff and fumble,


until the orchard throbs and every bee


is making an apple from a kiss.

Mending the Ordinary  by Liz Lefroy

I heard Liz Lefroy read at the Cinnamon Press celebrations in Northampton and wanted to read her poems again. These are poems about her family and what might be ordinary moments but for the extra-ordinary attention which she gives them.
Favourite poem Solving Insomnia